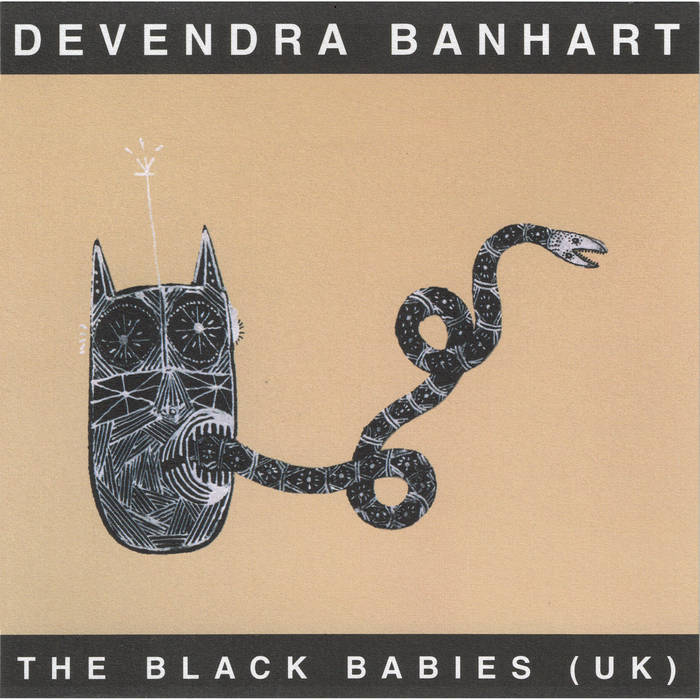 This is a special 8 song ep made by our UK distributor Cargo UK to help devendra along in his travels through the universe. It contains 6 songs that were not included on the album "oh me oh my…" , taken from the same endless collection of songs we raided for the album. It also includes 2 songs that were on "oh me oh my…" - the charles c. leary, and cosmos and demos.- Michael Gira/Young God Records


Some reviews from the time

New York singer/songwriter Devendra Banhart has been rightly compared to pre-T Rex Marc Bolan, when the mystic and elven side of his personality was more prominent than during the later glittery "jeepster" period. Like early Bolan, Banhart is perfectly in tune with the pure nature of songwriting and has a gift of being able to pull his verses out of thin air. Embroided with a blast of Huck Finn whistling or a single handclap, Banhart's effortless technique is touched with something highly personal, spectral and very special.

The simple challenges of Devendra Banhart

His music comes from a place that is unbelievably pure

This week the Library of Congress announced that it had selected 50 recordings that would be preserved in order to start a national registry of important recordings. The list is impressive in breadth and quality, encompassing such diverse artists as Scott Joplin, Abbott and Costello, Frank Sinatra, Miles Davis, Bob Dylan and Grandmaster Flash and the Furious Five. It is an ultimate one-stop list of all the important milestones in our nation's history, both musical and otherwise, and serves as a fascinating document of the last century, revealed through the myriad sounds captured on wax cylinders, reel-to-reel tapes, vinyl LPs and CDs.

If there was another of these lists published in 50 years, one Devendra Banhart might well be on it. His music comes from a place that is unbelievably pure, immune from any sort of music scene. It is some of the most honest music that you'll ever hear, and literally sounds as if it could have come from any time, any place.

Devendra Banhart is a 21-year-old New-Yorker-by-way-of-Texas whose new album, Oh Me Oh My … is a staggering work of unstable brilliance. Banhart sings and plays guitar over 22 compelling songs, some of them long, fully fleshed-out compositions and others merely sketches, glimpses into Banhart's unique - and occasionally unsettling - mind. The songs are open, sparse and lonesome and feature, mostly, just Banhart and his finger-picked guitar. He creates instantly memorable, if occasionally off-kilter melodies and sings over them in a unique voice that stands alone in the rock canon.

Honestly, the closest comparison might be Tiny Tim, but Banhart is a serious artist, and his high-pitched, double tracked vocals soothe rather than irritate.

The songs are simple, but intelligent, and Banhart's guitar playing is occasionally evocative of Nick Drake or even Fred Neil. His lyrics operate on a subliminal, symbolist level, stringing together series of phrases, imagery and emotions to create scenes that are at times pastoral and elegant, and at other times claustrophobic and disturbing. The album was named "Underground Record of the Year" by the New York Times, and Banhart was recently featured in Mojo, Rolling Stone and Spin, proving that somehow, in this world of synthesized pop stars, some people still understand the work of a creative, challenging artist.

From recent Other Music newsletter:

The new U.K. EP follow-up to last year's celebrated "Oh Me Oh My..." features six great unreleased songs plus two from the previous album. The production technique remains the same, as does the high level of crafty songmanship. If you're afraid these are just crappy leftovers from "Oh Me Oh My..." don't worry. Folk troubadour Devendra Banhart continues to develop his song's cosmology with an ever-broadening cast of characters and themes. "Surgery I Stole" and "Long Song" are as pretty as anything he's recorded yet, and "Lagoon" may end up rivaling that "Oh Michigan" track for his most requested song at live shows. Since we reviewed his debut album last year, he's become one of the most talked about singer-songwriters going, even showing up in a long segment on NPR's Morning Edition this past weekend. All at the fresh age of 22, an amazing accomplishment. (MK)

Take one damaged 21-year-old drifter, give him an acoustic guitar and some busted four-track recorders, and the result is a compelling mix of the eccentric and the sublime.... Certainly Devendra Banhart's beautifully raw debut album sounds like nothing else ... more than just spittle in the face of an over-processed music industry. Soulful, troubling and troubled, it's a spiritual manifesto from a one-man species. -Neva Chonin, San Francisco Chronicle

It's the voice that pulls you in, flitting from lilting to hectoring, sweet to sinister.... He could be Barrett-era Syd possessed by the soul of Tiny Tim ... an album that escapes definition, beguilingly sweet, yet ever so, ever so dark. -Andrew Male, Mojo

The quaver in Mr. Banhart's voice is as shaky as his songs' connection to everyday reality. In lo-fi recordings-- usually just his guitar and his multiplied voice-- his songs and fragments ponder animals, apparitions, logical leaps and childlike certainties, all with credible eccentricity. -Jon Pereles, The New York Times

The title says it all. A startlingly talented 21-year old from LA who looks like Vincent Gallo after 40 days and 40 nights wandering the desert communing with the spirits Of Nick Drake and Jeff Buckley, Devendra Banhart is a dreamer, mystic, crackpot, poet and a cult figure waiting to happen. His songs are simple, but contain a strange energy. His voice is either soft and devotional or shrill and deranged, as if possessed by a malevolent split personality. Lyrically he can be nonsensical or matter of fact, but he keeps you mesmeried.This bizarre yet beautiful record is a genuine modern classic. 9/10 -Ian Watson/NME

Itty-bitty scraps of thoughts/impressions, poetic prose in simple frames of spidery acoustic guitar and a startling voice that warbles high, fretful and

foreboding-- vulnerable, of course, but comforting, too ... loads of actually fantastic guitar picking and several thrillingly unconventional song shapes ... but what in lesser hands would be merely irritating is in Devendra's undeniably authentic and even authoritative. Oh Me Oh My... sets new (its own) standards; by the end of one spin, it's not weird at all, more a darkly angelic kind of beautiful. -John Payne, LA Weekly