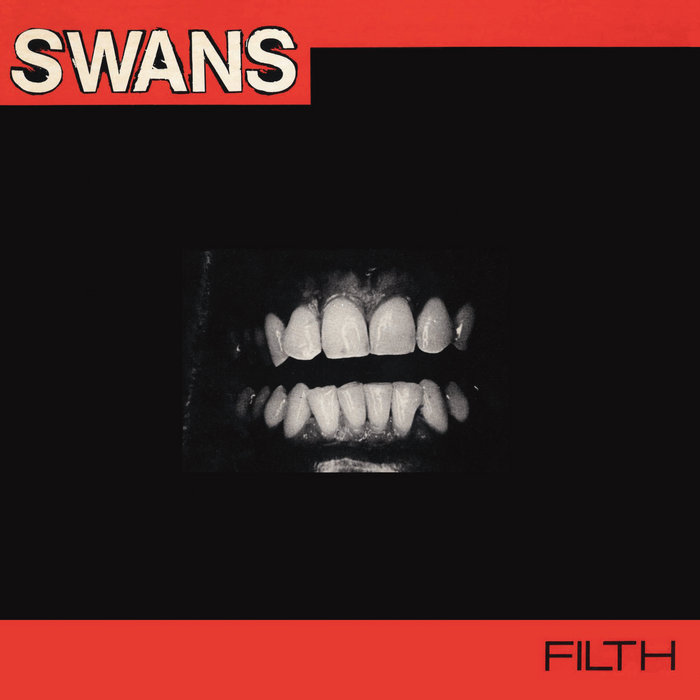 Aria Callaghan it's like a dance party with all yr inner demons Favorite track: Thank You.

Nick Saunders This album is like being kicked in the teeth but in a really enjoyable way. Favorite track: Power For Power.

filtinator This makes me want to thrash and go wild every time I hear it! Favorite track: Freak.

neur0dancer imagine the '80's without Swans.....wouldn't be the same for me

“This is all slabs of sound, rhythm and screaming/testifying. What more do you need? In a way, it was a reaction against Punk (and just about any other music you can think of), and the conservative notion that 3 chords were somehow necessary. I used to deny it vehemently at the time, but No Wave (I “hated” that scene too, for some reason I can’t remember now) played a big role as the germ from which this music grew, along with The Stooges and Throbbing Gristle, of course. I wanted Swans to be “heavier” though – I wanted the music to obliterate - why, I don’t remember! I think it just felt good. Live, we used two basses (playing utterly unmusical chords that were stabbed and left to sustain or sometimes hit in staccato or opposing rhythms), drums, a “percussionist” that slammed down on a metal table with a metal strap, crude cassette loops of various sounds/noises (usually some kind of undefined ROAR), and Norman Westberg’s glorious sustained and screaming guitar chords. It was pretty elating to play live – for us. If 100 people showed up (which would have been a huge audience at the time – 20 was more the average), 80 were guaranteed to leave by the second song. Somehow that tension – contempt or indifference from the audience – was nourishing, so we kept going. “

The 3CD package constitutes a definitive, comprehensive document of SWANS during the time period 1982 – 5, beginning with the first EP and the debut album Filth, and leading up into various early rare live recordings as well as studio outtakes from the Cop and Greed era… Accordion booklet includes archival photos and graphics… Entire 3CD set re-mastered in 2015.

DISC TWO: Body to Body material comprised of various studio out-takes and live recordings 1982-85, with a nine-minute version of "Raping a Slave," recorded live in Berlin, 1984.

Assorted reviews for the 2CD Filth/Body to Body set, below. Filth is now exclusively available with an additional, 3rd CD comprised of the first Swans EP (1982) as well as additional live recordings:

From the center of New York's celebrated downtown music scene emerged a most ugly ducking, the Swans. With a sound like a ditch witch stuck in a tar pit, in 1982 the Swans were the height of noise. Musically, it would be termed proto-industrial, proto-noise rock, but aesthetically it was a sound shot through the axes of power. Strung between the poles of domination and submission, the Swans created a music with a sexually dark, malefic vision of society as despotic and individuals as subjugated to the point of dissolution. This double album, part of a planned series of reissues, captures the Swans at the beginning of their career. The first CD contains their earliest album, Filth, along with a previously unreleased live performance at the Kitchen. It's a classic album and, even though the quality isn't great, sounds more uncompromising live. The second consists of unreleased studio tracks, tape experiments, and live recordings from 1982 through 1985, providing an interesting balance to the "finished" compositions of Filth. It shows Michael Gira et al. testing the limits of their sound, exploring new directions, and laying the groundwork for future albums. Releasing them together makes a point about the experimental quality of the Swans' work.

There are many bands that try to make brutally heavy music; a handful of those bands actually succeed, and then even less of those bands reach the terrifying level of intense brutality that New York's Swans delivered throughout the first half of their musical career (before they veered off into a softer, although no less interesting direction until their demise in the mid-`90s). Their first full-length album entitled Filth is an exhausting exercise in the art of noise terrorism and completely crushing brutality, and I absolutely adore it.

The music -- it consists of almost "industrial" (not the genre) sounding instrumentation similar to that of Einsturzende Neubauten, though less experimental and very straightforward. Heavy, crushing blasts of noise hit over and over and over again with vocalist Michael Gira going totally manic. The whole thing is really very simple, yet at the same time completely original and remarkably potent. My personal favorite track "Stay Here" is a perfect example of this: a brutal, metallic beat being played over and over again behind yelled and occasionally growled vocals. Lyrically the album is very dark, heavy and bleak, just like the music sounds, although there is definitely a sense of irony and satire in a few of the lyrics.

I should probably state now that this is definitely not for everyone -- this is extremely loud, brutal and uncompromising music not made with any "audience" or "scene" in mind. I get the feeling that this is what the world must sound like inside Gira's head -- and what a violent, terrifying and wonderful world that must be. It's hard to compare it to anything else...maybe a slight comparison to early Einsturzende Neubauten, and I know that the Wolf Eyes were in some way influenced by the Swans. However the Swans are far more structured. musically speaking. But you get the idea -- just that crushing, iron-hitting cement sound that pretty much makes everything else look soft by comparison.

Henry Rollins once said "It doesn't get any heavier than the Swans. That's pretty ultimate stuff" and I'd have to agree. My favorite tracks include "Stay Here," "Blackout," "Power for Power," "Big Strong Boss." If you think you can handle it then by all means pick it up, along with the albums Greed + Holy Money and Cop / Young God.

Since Swans demise in 1997, Michael Gira has meticulously re-packaged exactly what he wants to preserve of Swans 15 year legacy via double cd re-issues, this being the fourth and final one. This set couples the long out print 1983 debut album Filth and the 1982-85 studio out takes and live recording collection Body to Body, Job to Job. In addition is a previously unreleased 25 minute live show in NYC from 1982/3 and a 9 minute live version of "Raping a Slave" from 1984. Noticeably missing are the four songs from the debut s/t EP from 1982

Swans always had the potential for brutal sonic assaults throughout their life span but this era in particular focused solely on an uncompromising and unapologetic, sledge hammer sound. Melody and harmony are essentially absent in favor of pounding percussion, raw slabs of guitar and bass sound and Gira's guttural vocals. Lyrically Gira reels against authority and control, money, sex, violence, etc. with simple, receptive slogan like chants. Altogether it's a big, ugly, intense, slowed down mutant strain of punk rock that was all their own, at least, up until everyone started copying them. The 25 minute live show (indexed as 1 track) on the Filth disc is bootleg quality but in this case it doesn't much matter as it's comparable to, and just as interesting as, the numerous rare live recordings on the Body to Body disc. It's a bit of a challenge to listen to all of one disc at a time, much less the entire 2 hours and 15 minutes, but for those days when you get a traffic ticket, you're doing your taxes, you hate your job, your significant other leaves you or you just plain hate everything ... this is your soundtrack. Say what you will about Gira's track selection for these re-issues but he certainly did a great job of creating a great looking and sounding set of discs for old and new fans alike.